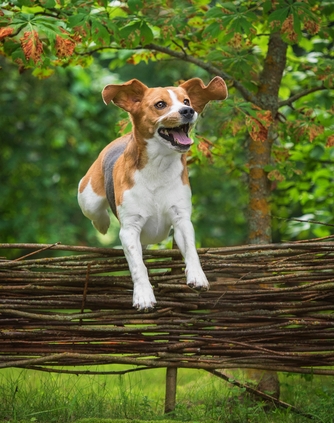 When it comes to affordable dog fencing there aren’t many options as fencing is actually quite expensive.  As with everything you get what you pay for and it depends on whether you want to get your hands dirty. Naturally, these fencing options are based on how large an area you need to fence. The landscape that you need to fence. And also the breed of the dog that requires the dog fencing!

If you are looking to fence a small back garden then it is likely that you already have a fence or wall but it isn’t meeting your needs. Watch your dog and see if he is using something to climb up and scrabble over or is he climbing or digging. Consider installing trellis above your fence. This can be bought from any good DIY store and is relatively quick to install. If you have a digger add a concrete footer below your fence by pouring concrete along the edge of the fence and sinking the bottom of the fence into the concrete before it dries.  This is naturally a labour intensive job but should do the trick! 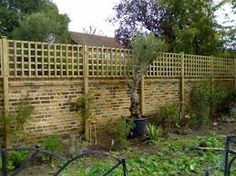 Trellis placed on top of wall

If you are not sure where he is getting out then one of our DIY dog fences is going to be the cheapest way forward. These fences are under £250.00 and will cover a small urban garden. If you compare the price of re-fencing a complete rear garden versus adding an electronic dog fence the dog fence will win on price all day long!

For small gardens with low fences, you may be able to upgrade your fence to a close board fence. These fences start at around £38.00 per metre fully installed. You will need to check that you can install a fence of this height before ripping out the old fence.

It goes without saying that dog fencing for rural areas can be a headache. Not only are you trying to stop your dog going out but the local wildlife is busy pushing its way in. If you have an issue with rabbits and small dogs then this could be a good option for you but it is not the cheapest! Rabbit fencing starts at approx £130.00 per 50m without installation! If you are covering a 1-acre site this will cost in the region of £690.00 just for the galvanised mesh without any posts of labour. Also unless it is extremely well-installed rabbit fencing can be damaged by larger mammals such as Badgers, Muntjack and larger Deer. 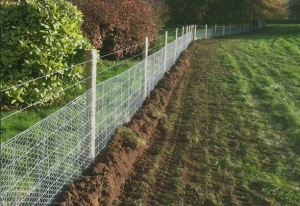 If you have hedges or areas with no existing fences then the cheapest form of fencing will be either a stock fence or an electronic dog fence. If you have horses or livestock then you will need to look at stock fencing options. Of course, if it is only a dog or a cat that needs containing then an electronic dog fence is by far the cheapest option.

Our DIY dog fence can be expanded up to an acre for an additional £100.00 and a Professionally Installed dog fence will cost in the region of £1000.00 depending on the location and number of dogs. This would work out more cost-effective than the galvanized or stock fencing and would also protect the driveways. Installing gates can also be very costly and of course, this relies on people shutting the gate when they come or go! Our Professionally installed fences have a lifetime warranty on the hardware and a containment promise for the dog.

If it aesthetics then Estate fencing is most certainly the winner but you will need deep pockets to install this timeless classic! At around £80.00 per 2m panel + installation, it will very soon add up, especially on the large country estate! Again, you will need to think about gates and this type of fencing is not dog secure. Other popular types of fencing are post and rail with stock fencing below or chain link fencing. Chain link fencing is probably the cheapest starting from around £2500 for 1 acre + installation. Whereas if you are looking at fencing 10 acres using our Performance Series on a 10-acre site the cost would be circa £1800.00 including installation & training. 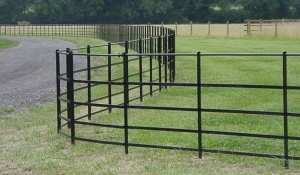 If your property goes down to the river you may be able to install a small picket fence. These will not stop all dogs as they tend to only be a 90 cm – 100cm high. Prices for Picket fencing start at around £12.00 per metre plus installation.  Alternatively, you can use our dog fence to run along the boundary. This will keep your dog out of the river without disrupting the view. If you have very undulating terrain then you will probably need to install a stock fence but there would be a hefty surge-charge to install this! Again, an invisible fence can be installed for a fraction of the cost.  The trencher used to install the invisible dog fence is extremely adaptable and be operated in both steep and undulating terrain. Images of the dog fence trencher can be seen on our installation & training page. 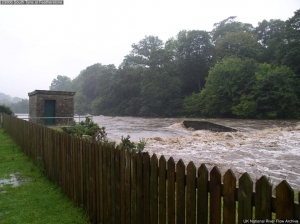 Based on an acre (and excluding gates)

Prices have been based on submissions from Companies in Berkshire (2019). Prices are based on properties in the local area and are a guide.

If you have been searching for dog fencing options then read our testimonials on our Trust Pilot reviews. If you would like more information or prices call us today on 03450 623623 or complete our quote form.

What are electronic Containment Fences and how do they work?

Containment fences hit the news earlier this year when the Government declared that they intended to ban e-collars for training dogs. 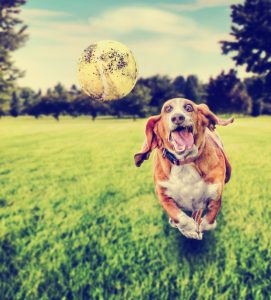 The comments from the DEFRA team were as we suspected “it’s not that bad” and “it’s not what I imagined”.

So what is a containment fence?

It’s actually an invisible fence or virtual fence which is created by a radio signal. Originally invented to keep dogs safe at home in the USA where gardens are traditionally unfenced their popularity has grown in recent years.

A containment fence is actually a very simple and unobtrusive system which can be installed on virtually any property at a fraction of the cost of traditional fencing. It also offers for safety than conventional fencing as the pet can’t dig under or jump over the fence and it protects open areas such as driveways.

A boundary wire is placed around the property boundary which transmits a coded radio signal to a collar worn by the pet. When the pet approaches the boundary wire a high pitched warning beep alerts the pet to go back. If the pet continues forward, an electrical impulse is given through the collar (this is often referred to as a correction or static shock) and the pet retreats back into the safe area.

How does the pet know where to go?

Every pet undergoes a training programme which usually takes 2 – 5 days. When training to a containment fence it is important that the boundary is flagged to give a good visual of where the virtual fence starts. The flags stay in the ground as a visual marker for approx. 2 – 3 weeks. Containment fences can be used for dogs over the age of 12 weeks and cats 16 weeks or over.

The trainer will take the dog outside and set the collar to “beep only” mode. Using some voice commands, he will introduce the dog to the containment fence training flags and later he will allow the dog to enter the “no go area” of his own accord. By re-focusing the dog back into the safe area with the assistance of the warning beep and vocal commands the pet will quickly learn where he can or can’t go. Following the beep only session the training moves onto to assess the correct level of impulse (correction) required for the pet.  If the owner has more than one pet the likelihood is that they will each have a different training level.

Visible boundary for the pet with flags.

With cats the training is carried out internally following the Dog Fence Cat protocol. This training protocol was used as part of the Lincoln Cat Containment Fence study.

Will the containment fence hurt my pet?

Of course the thought of giving any impulse or shock to your pet can be abhorrent. It is important to note though that the impulse is very low and is usually only felt during the training phase. The sad scenario is that the pain felt from a car is almost unimaginable and the discomfort of containment fence is no worse than an annual vaccination. Also for dog owners there is always the threat of a shot gun as dog attacks on sheep are rising annually.

What areas of the garden will the containment fence cover?

Interestingly, containment fences can cover the entire garden including the driveway. The largest installation that we have installed at Dog Fence is 450 acres. Usually the fence wire is dug directly into the ground (approx. 3 – 5” below the surface) but it can be attached to existing physical boundaries. It is not uncommon for the fence wire to be attached to post and rail fences, stone walls, run through hedges, ditches or streams and even the odd moat! When it comes to the driveway any surface can be crossed except Resin bonded drives which require special attention.

The original containment fences from the early 80’s used heavy bulky collars but as with the mobile phone technology everything has been scaled down in recent years. Not only have the collars become smaller and lighter but the battery life has also increased.

At Dog Fence we can boast the smallest and lightest collars worldwide. Our mini containment fence collar only weighs 30g but still features an incredible 6-month battery life. Incredibly our standard collar has a 2-year battery life and weighs in at only 48g which is still the 3rd lightest collar available worldwide!

How much do containment fences cost?

A containment fence costs a fraction of the cost of installing a traditional fence or driveway gates. Unlike a wooden or stock fence a containment fence becomes more cost effective the larger the area. Naturally the price is dependent on the owner’s location and the number of dog or cats that they have. There is no need to visit a property to give an estimate for the containment fence; this can all be carried out via our online survey tool.

Thankfully, the Government looked at the evidence, research and responses from containment fence owners and deemed these lifesaving systems safe to use. Indeed, Michael Gove stood up and supported the life-saving fences in Parliament.

If you are interested in receiving a quick free quote contact us today on 01628 476475 or fill in our quote form https://dogfence.co.uk/quote/