What is a freedom fence or  Invisible fence?

So what is a freedom dog fence? it’s actually is a generic name for an electronic dog fence. Very similar to a “hoover”, a freedom fence, invisible fence or DogFence are often used to describe the containment fences. These dog fences were first produced in the USA over 40 years ago.

The History of Invisible Fences

Electronic pet containment systems originated in the year 1973. The overall concept began due to humanitarian emotion from American Richard Peck. Peck was a salesman in Pennsylvania selling his company’s metal cutting and welding services. 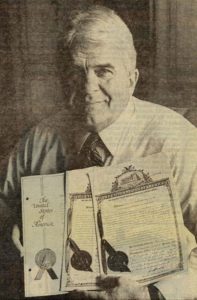 Richard Peck with his original Patents

“I traveled the United States and everywhere I went, I literally saw hundreds of dogs that had been slaughtered by cars. They were all over the roadway,” Peck said years later. “I loved dogs and knew there had to be a way to stop this.”

The development of dog fences

In 1973, Peck partnered with an electronic engineer and patented the first electronic dog fence system. The collar was placed on a pet and received radio waves from a wire buried beneath the ground. The radio waves were transmitted through the wire from a transmitter protected inside the house. When the radio waves are received by the collar, it sends a brief uncomfortable static shock under the pet’s skin. The “shock” deters the pet from traveling farther into a designated zone. In todays’ world date the word “shock” should be replaced by stimulation as the impulse produced is incredibly low and incapable of inducing a state of shock.

Always concerned for dog safety, Peck worked with the University Of Pennsylvania School Of Veterinary Medicine. Together they conducted extensive research on the short-and long-term effects the new system would have on animals. The study proved it was extremely effective for influencing behavior of animals and keeping them contained in a specified area. Furthermore, the study proved that pets that were contained by a freedom dog fence had no long-term ill effects from the stimulation.

The late 1970s in the USA there was a rise in the popularity of housing estates forbidding traditional fencing. This made it almost impossible to have a large dog. Naturally with the new “invisible fence systems”  quickly became popular. Peck initially sold the systems through catalogs and direct mail. The growth of the company was very slow. There were only 50 systems sold the first year. The fences were promoted by two nationally distributed dog magazines, Dogs and Dog Fancy.

Peck retired in the early 1980s and sold his company to private entrepreneurs outside of Philadelphia. These entrepreneurs invested in product improvements and named the product “Invisible Fence.” The engineering staff began refining the technology of the existing product. The company began selling a compact, lighter version of the receiver collar that went from 13 ounces down to 3 ounces. Thus the market was opened so that smaller dogs and cats could utilize the Invisible Fence solution.

In 1990, the overall patent for the technology expired and other companies to began to appear. This led to the rise in other manufacturers, PetSafe, DogWatch, and Innotek. These Companies have produced their own version of the original invisible fence. The early systems were not available for self-installation and Freedom Fence Dealers were part of the PetSafe network that started offering installation across the USA.

Dog Fence, Invisible Fence and Freedom Fence dealers started to import the technology into Europe and Australia. These markets were mainly self-installation markets and over time some dealerships started to offer a limited installation service through agents and part-time sub-contractors.

In the UK there were 3 Companies offering Installation for freedom dog fences:

The original Invisible Fence UK Dealer has recently retired after selling both Invisible Fence and Innotek systems for over 25 years. Most of the Invisible dog fences were sold for self-installation.

This business model is slightly different and is made up of a large number of representatives who work on a sub-contract basis. These individuals will install the PetSafe and PetSafe Professional brand of dog fence. PetSafe fences use the same AM technology that was used to produce the original Invisible Fence systems. As these are part time representatives they do not all offer the same level of service.

DogFence  Ltd were the first Company to offer complete onsite Professional Installation & Training for dogs and cats. This Company uses the DogWatch brand of hidden fence which was developed using an FM radio frequency. When it comes to technology the FM signal is far safer and faster than the AM operated fences. DogFence Ltd pioneered bringing the full installation & training service to the UK. Unlike Freedom Fence the installers are all employed by DogFence. This gives consistency in quality of service and equipment standards.

Why is Technology Important?

Arguably most peoples pets are part of their family, they are as important as children or siblings. Naturally one wants to do everything they can to protect them which is why they install a dog fence. As with your car it is important to look at safety features within each product.

The Original Invisible Fence used an AM radio signal. This was mirrored by all manufacturers except DogWatch (DogFence). DogWatch inc were concerned about the high numbers of false activation on the receiver collars with AM. The dog may not be in the zone but the collar was activated because the collar picked up a similar signal. It is for this reason that they decided to explore using an FM signal. After developing and patenting the FM signal it quickly became clear that this was a far superior channel.

Why is the FM signal safer? The reason for the FM signal is to ensure that nothing else can activate the dog or cats computer collar. The Freedom Fence and Invisible Fence brands use OOK (on/off keying).  With OOK the collar is open to picking up other signals when it is in the “down” time. This means that the collar can activate when the pet is not in the “no go zone” as it has “heard” another signal.

With the DogFence system the signal is constant and the collar can only read the programmed signal. In order to reduce case of false activation freedom fence and invisible fence systems use a 2nd signal to reduce confusion. Naturally checking for 2 signals slows down the reaction time on the collar.

Why does speed affect the dog fence?

Put simply if your dog is racing towards the no go zone the collar needs to stop him before he runs into the road. With the DogFence system if he runs at 10mph he will only get 0.125ft into the zone before the collar has given a warning beep and impulse. With a freedom fence he will be at 7ft before the collar has activated. Conversely many people never consider the shut down time on the fence. What happens if the dog retreats? How quickly will the collar stop? Again, speed is crucial the start up and the shut down times are equal. If your dog retreats the FM fences will shut down in less than 1 second. With the PetSafe, Invisible Fence and Freedom Fences AM brands the time is 2 – 5 seconds. Food for thought! 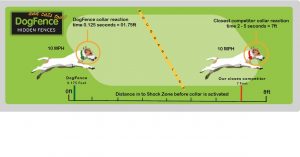 Today there are well more than 2 million freedom dog fence systems installed worldwide. Recent studies by Lincoln University and the UK Governments consultation have proved that these fences save the lives of dogs and cats. It maybe that you are skeptical or adverse to the idea of using a Freedom dog fence but those that use them swear by them. A few of the comments from the Government consultation can be read here:-

If you would like to obtain more information on our containment fences call us (01628) 476475 or click here.