The truth about containment fences – the myths unraveled!

You’ve most likely heard more than one containment fence myth. There are not many products that are surrounded with such controversy or misunderstanding. People who have never seen or even used a containment fence will often feel qualified to repeat the rhetoric they have read. So let’s look at some of the myths and answer them honestly and frankly.

Containment Fence collars can hurt your pet and cause pain, fear, and distress.

Incorrect – modern fence collars are completely adjustable and can offer levels that are virtually undetectable even to human skin. It is true that the early collars (some 40 years ago) generated a high-level shock but as with all technology things have moved on considerably. Many owners will try the collar before using it on the dog and a popular response is “how will that keep my dog in?” The training aspect of the fence means that most owners will ask when the dog is going to receive the shock. They are then “shocked” when they learn that dog has already received the activation. Contrary to popular belief the dog does not leap into arms of the owner screaming and for most dogs, the flags are the scariest part of the fence.

Incorrect. The truth is that a fence collar is very similar to a Tens machine that humans use for physio and pain relief.  Studies have proved that there is no harm done to your pet. The “shock” that is delivered is actually a small static impulse and it too low to be classed as a shock.

Lie – It is physically impossible for a containment fence collar to burn a cat, dog or human. Actually, they don’t generate any heat and are incapable of causing a burn. If you want to put it to the test take a thin piece of paper and try to light it with a fence collar or even an e-collar.

“I’ve seen the burn marks!”  No, what you’ve seen is pressure necrosis. Pressure sores are caused when the collar is left on the pet for too long. The collar must be removed for a minimum of 8 hours in every 24 hour period.

Containment Fences are used by lazy people who can’t be bothered to train their dogs! 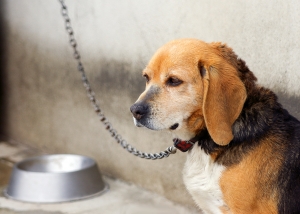 A chain is cheaper than a containment fence.

Interestingly, the Lincoln report proved that cat owners that used a containment fence had a closer relationship with their cats. This is probably because the cats are not allowed to wander but are content as they have access to the outside to display normal feline behaviors. Many dog owners report that their dogs are calmer once they are contained with an invisible dog fence. Again, this is probably because they are not locked away but are allowed free access to roam within a boundary and are able to just be dogs!

Invisible Fences are only for aggressive dogs

This is 100% incorrect an invisible fence should never be used for an aggressive dog. The fence is an invisible barrier and works in a subtle and gentle way. If a dog has a history of aggression he or she is not a suitable candidate for an invisible dog fence.

Our experience is the complete opposite. Folks who use containment fences are passionate about keeping their pets safe. Our customers range from ordinary families to vets, dog trainers, cat and dog rescue customers. Sadistic people will always inflict cruelty on animals but they will rarely spend money to do so. We have had owners that have said that they could never have had another cat or dog had it not been for the fence. The pain of having a pet injured or killed on the roads was too much to stand.

There will always be the “keyboard warriors” who are happy to spout rhetoric. When we come up against the propaganda we offer a simple invitation – “come and see for yourself, watch a dog or a cat in training or come and visit our dogs and cats and see for yourself. Afterall seeing is believing and what can’t speak can’t lie. To date, we have never had a single uptake for our invitation. The usual response is I don’t want to see or be a part of this. To those people we say:

“Your assumptions are your windows on the world. Scrub them off every once in a while, or the light won’t come in.”
― Isaac Asimov

We truly believe that if someone who is skeptical can be open-minded and meet with us they will learn. What they will see is that we offer a good life for dogs, cats and their owners. Indeed the UK Government decided this was the case in August 2018. After listening to containment fence users and meeting with us they concluded that containment fences save pets lives.

“However, after listening closely to the views of pet owners and respondents, the Government will not extend the ban to invisible fencing systems which can keep pets away from roads and potential traffic accidents. These devices are particularly useful for cat owners and animals often respond well to invisible fencing and quickly learn to stay within a boundary without receiving a static pulse.”

If you would like to know more about how a containment fence could work for you please call us – 01628 476475 or contact us for a bespoke estimate here.