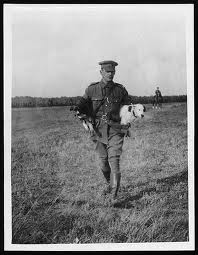 This weekend we be remembering and paying our respect to those who lost their lives  in the two World Wars and other conflicts. During World War I many dogs lost their lives assisting the troops in the trenches.

Dogs had a vital part to play in World War One as the complexes of trenches spread throughout the Western Front. Dogs were used as messengers and proved to be as reliable as soldiers in the dangerous job of running messages.

The complexities of trench warfare meant that communication was always a problem. Field communication systems were crude and there was always the very real possibility that vital messages from the front would never get back to headquarters or vice versa. Human runners were potentially large targets and weighed down by uniforms there was a chance that they would not get through. In the heat of a battle, there was even less of a chance of a runner getting through as the enemy’s artillery was likely to be pounding your frontline and the area behind it. Vehicles were also problematic as they could breakdown or the ‘roads’ could have been reduced to a mushy pulp and travel on them made impossible.

Dogs were the obvious solution to this pressing problem. A trained dog was faster than a human runner, presented less of a target to a sniper and could travel over any terrain. Above all, dogs proved to be extremely reliable if they were well trained. A dog training school was established in Scotland and a recruit from this school traveled over 4000 metres on the Western Front with an important  message to a brigade’s headquarters. The dog traveled this distance  (war records classed it as “very difficult” terrain) in less than sixty minutes. All other methods of communicating with the headquarters had failed – but the dog had got through.

Dogs also had another role to play on the Western Front. For men trapped in the horrors of trench warfare, a dog in the trenches (whether a messenger dog or not) was a psychological comfort that took away, if only for a short time, the horrors they lived through. It is said that Adolf Hitler kept a dog with him in the German trenches. For many soldiers on any of the sides that fought in the trenches, a dog must have reminded them of home comforts.